From Dancer To Designer… 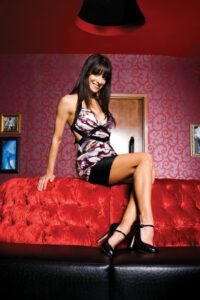 Dorimar Bonilla grew up in the island of Puerto Rico, where dance became her passion at a very early age. She continued her dance training and professional career in New York, before moving to Las Vegas, where she spent ten years as a respected producer, choreographer, and dancer. In 2011 she made it to Los Angeles to become one of the choreographers/ pro-dancers in the cast of the TV show “Mi Sueño Es Bailar” (latin version of “Dancing With The Stars”). Later on she became a part of the cast in the 4th season of Univision’s hit TV show “Mira Quien Baila”. After traveling the world as a soloist dancer, she currently consults in shows and manages entertainment projects. Dorimar’s great range of expertise and experience have led her to create a shoe that encompasses her diversity as an artist. The Dori Shoe personifies the mixes of culture and dance styles that have made Dorimar the performer she is today.

Since her first years in dance school, Dorimar was inspired by the ballerinas around her to some day create a shoe that would allow dancers to bring their ballet technique into the commercial world. Not even years of failed attempts through professional shoemakers could keep her from coming up with a functional model of her vision, as she personally figured out how to hand make the first few pairs in 2007. Those first few pairs were soon found on stage in a European-style cabaret show at CatHouse, in the Luxor hotel in Las Vegas. By 2009, Dori Shoes could be found in various shows on the Las Vegas strip. From cirque dancers, to ballroom competitions, to soloists, as well as partnering dance acts, nowadays Dori Shoes are seen in performances worldwide.

“I always thought; if pointe shoes had heels, we could showcase our classical training when we go into the commercial/ professional world as naturally as we do other styles”.
– Dorimar Bonilla

“After 22 years on her heels as well as her toes, Dori has developed her own dance shoe, a combo ballet pointe shoe and high heel she calls the Dori Shoe, which allows dancers to mash up movement styles.” – Las Vegas Weekly